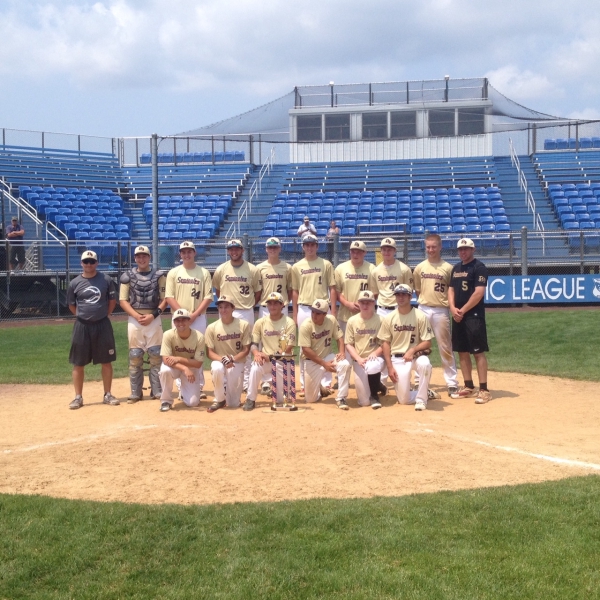 In a game and tournament that will be talked about and remembered for some time to come, the 16u Steinberger Seminoles defeated the CGI Braves White 4-2 in 10 innings to win the Boys of Summer Independence Day 16u Championship at the PAL Athletic Complex in Holtsville, NY.

The Seminoles were up 2-0 in the 6th as starting pitcher John Cappozzoli threw 6 2/3 innings of 4 hit baseball. The Braves however would tie it up at 2 and were threatening to take the lead. A pitching change was made as Cappozzoli would move to center field while Matt Quinn would come on in relief. Quinn’s first pitch is a line drive to right center in the gap and out of nowhere Cappozzoli makes a diving game saving catch to end the inning and keep the score tied at 2-2. It was a huge play that was a momentum changer and propelled these gritty “never give up” Seminoles to believe it was their time. Quinn pitched scoreless baseball to the 9th inning. In the 10th, Peter Secusa and Frank Micheles sparked the Seminoles rally as the Noles scored two runs to take a 4-2 lead. Peter Conti, who had pitched a complete game yesterday to get the Seminoles into the playoffs, came on in the 10th to get the save. Five out of the final thirteen outs recorded by the Noles pitching staff came via the strikeout!

Whether you’re 11u or 17u, there are so many lessons learned from this tournament win from our 16u team. The boys started out 0-2 in the tourney and could have mailed it in but they kept playing until the last inning and the last out. With a strong day two performance, the boys qualified for a playoff spot. They beat the #1 seed in the semi-finals and though it appeared the Braves were rallying to take the lead in the 6th, Cappozzoli, who was unable to finish the game on the hill, moves to centerfield and makes the game saving catch to send the contest into extra innings. Matt Quinn keeps the game tied at 2 and Peter Conti, on no days rest, delivers a gutty 10th inning to get the save and the Noles their championship. The mantra; never give up; play every inning. You never know and hey, why not us? Steinberger 16u proved that this weekend with outstanding determination to compete for every base, every run, and every inning. Congratulations Coach Steinberger and Coach Leonick and players on being the 2015 Boys of Summer Independence Day 16u Champions.