A Great Day for Seminoles at Mitchel Field 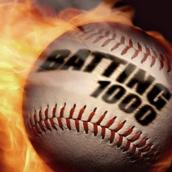 It was a beautiful Sunday afternoon at Mitchel Field and the 17u boys semifinal of the Boys Of Summer Memorial Day Tournament would match up two of our 17u teams at Batting 1.000. Anthony Rinaldi’s squad went toe to toe against Tom Smith’s crew and the crowd was treated to an outstanding game. Smith’s James Wiercinski and Rinaldi’s Danny Taggerdt put on quite the show on the mound as they dominated the hitters all afternoon. Wiercinski would allow just three hits while striking out 8, Two of those by Ryan Connolly, the other a triple by TJ Rullo who would figure in the lone run scored this afternoon in the bottom of the 6th. Danny Taggerdt would allow just two hits while striking out 11 in the complete game 1-0 win. The only two hits were a Tim Cassese base hit up the middle in the 3rd and Vito Mazzilli who doubled in the bottom of the 7th but was stranded and unable to score the tying run. Rinaldi’s Ryan Connolly would score the lone run of the game, singling in the bottom of the 6th, stealing second, advancing to third on a wild pitch and scoring with the infield in on an rbi ground out from TJ Rullo. It was a great game to watch and the organization is proud of both teams for competing at such a high level. Rinaldi’s Seminoles will take on the Body Armor Titans at Mitchel Field Monday at 11am.
Great job to both teams ! Keep working hard.